Inflation: the cause and solution to all of life's problems

Inflation rates are running about 4% annualized right now, yet the Fed remains largely unconcerned. Brazil and China are running inflation rates nearly twice as high. This afternoon the US 30 year treasury rate is 3.18%, resulting in a -1% real yield (approx. interest rate - inflation rate). In fact we're seeing negative real yields all around the world. This is bad news for anyone trying to save money since they're essentially losing money every day. Yet for the past year central bankers around the world say this inflation is temporary and will soon subside, but how long before temporary inflation is no longer temporary? And now some members of the Fed have started supporting higher inflation rates as monetary policy. Uhhh... what?!?! The Fed's primary mission is to maintain price stability - now they're coming out and saying they want to promote price instability. Of course Volcker has called them out on it in the NYT:

People have come to expect too much of the Fed and as a result the whole institution has become too politicized. This last happened in the 70's with BAD results, the whole reason we have a separate Treasury and Fed is so that the people who spend money aren't the same ones who print the money. I'm not sure this is the case anymore. Monetary policy is no panacea, good monetary policy does not stimulate the economy it lets the economy grow on its own. On the other hand bad monetary can really mess things up by distorting incentives for saving and/or lending. Maybe its just the Austrian Economist in me but the Fed isn't supposed to give the Treasury a blank check, the Fed isn't responsible for maintaining full employment and most importantly the Fed isn't there to bail out irresponsible banks. It is a great institution with a strong history of success, but over the past few years it has overstepped its bounds - illegally some might argue. However we don't need to end the Fed, we need to keep it independent and outside the sphere of politics. 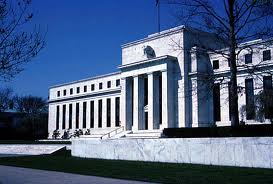