Market prices are implying that Greece has a 98% chance of defaulting over the next 5 years:

Of course this has every asset market jittery. Who's next? How much longer can Ireland or Portugal survive? How bad will the losses be at French and German banks? Then of course there's Spain and Italy. Scary stuff. Europe really dug itself into a hole here, the periphery borrowed more money than they could afford to repay. Normally this wouldn't be a big deal, countries default on their debt all the time except that a lot of the money was borrowed from French and German banks. So now the Europe's peripheral problems are core problems. The French and German banks are already under-capitalized due to all their real estate losses and according to Basel II they don't need to hold capital for sovereign debt. I guess no one asked how the Greeks were actually spending this money. Michael Lewis  wrote a great article about this in Vanity Fair last year: 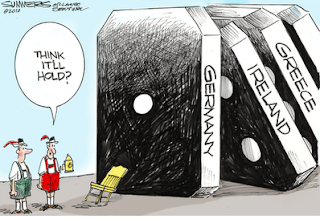 Email ThisBlogThis!Share to TwitterShare to FacebookShare to Pinterest
Labels: europe